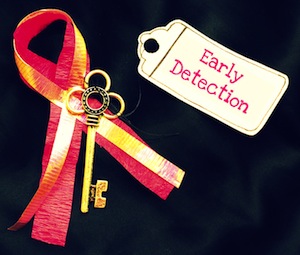 In the more near-term, Canary researchers foresee important steps becoming practiced in our lifetime. A patient will most likely go into a doctor’s office, and get an extensive panel of blood work done at an annual exam. If the results are positive, an imaging test will be conducted to determine exactly where the cancer cells are. We already know this truth: when found early, a tumor can be removed or treated before it spreads. The patient’s survival rate increases to 90% (generalized) compared to the 10% survival rate when found late (today’s norm).

These tandem tests – a blood followed by a molecular imaging test – will become more efficient and affordable over time and as they become more widely used, and countless lives will change for the better. Diagnostic platforms will become faster. Doctors will no longer need to send tests out to a lab and make patients wait two weeks to get results. Misdiagnosis will become a thing of the past. Surgery or treatment will address cancer early. With the right investment, cancer can be eliminated or reduced to a condition to be managed, not the detrimental diagnosis it most often is today.

Canary is working on demonstrating safe, efficient, cost effective tools to find tumor cancer early when most treatable. These tests can turn cancer around. Saving lives and improving lives is an achievable goal if we as a nation put our minds to it. Now that’s a future we can all look forward to.