Early detection remains one of the most important ways to reduce the impact of cancer.

Yet for many cancers, there remain no accurate tools or tests for detecting the disease before it spreads. Support from the Canary Foundation provides critical resources to explore the most novel approaches for improving our ability to detect and treat cancer at its earliest stage. The Stanford Cancer Institute is delighted to be part of this important effort.

The right collaboration and the right partnership change everything. Recognizing early on that we couldn’t do it all alone, we’ve always cultivated strong relationships with institutions, academia, and industry to bring together a diverse set of stakeholders to take on early cancer detection research.

Our foundation partnerships link mutual scientific expertise and entrepreneurial spirit in the hopes of advancing research in the diagnostic arena of early cancer detection. Together, we’re creating a world where cancer is diagnosed at its earliest stage to save lives. 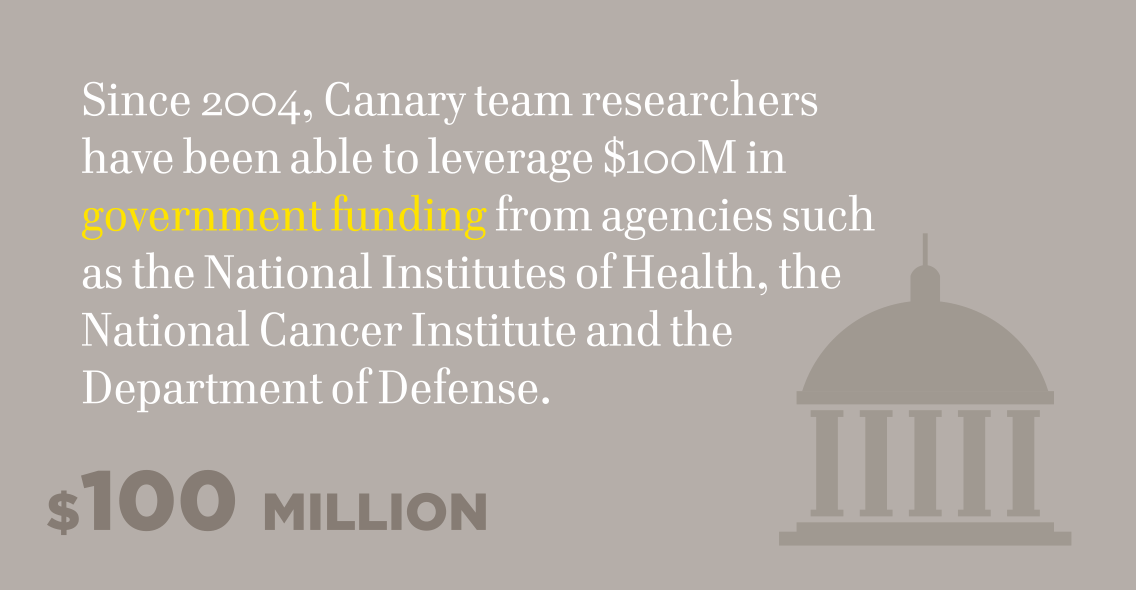 BIDMC is a site for the Canary Prostate cancer Active Surveillance Study (PASS). PASS is a multi-center study enrolling men with early-stage prostate cancer who elect to manage their cancer by being actively monitored rather than immediately treated.

British Columbia Cancer Agency (BCCA)/BC Cancer Foundation, Vancouver, British Columbia
Canary is supporting research for prostate and lung teams. Canary Foundation and BCCA are also managing a resource of antibodies and hybridomas that were created by the Canary Foundation in Victoria to test candidate biomarkers for lung, pancreatic, prostate, and ovarian cancer. In the past, BCCA has supported the Canary Antibody and Assay Production Facility to create reagents to test biomarker candidates.

El Camino Hospital, Mountain View, California
Canary and El Camino Hospital are embarking on a series of clinical trials aimed at biospecimen collection and banking for breast, ovarian, pancreatic, and other cancer types.

Fred Hutchinson Cancer Research Center, Seattle, Washington
Canary supports ovary and prostate team research and PASS at FHCRC. For PASS, FHCRC houses the data management and coordinating center and the central biospecimen repository. In the past, Canary has supported the lung, ovarian, prostate, and baseline (to profile baseline biomarker levels in healthy individuals) team awards at this research center.

Stanford University Medical School, Stanford, California
Stanford is a site for the Prostate cancer Active Surveillance Study (PASS). Canary also provides support for lung and pancreatic cancer research at Stanford. In the past, Canary has provided support for the lung and ovarian research teams.

University of Washington (UW), Seattle, Washington
UW is a site for the Canary Prostate cancer Active Surveillance Study (PASS), and Canary has provided support at UW for the ovarian and pancreatic cancer teams.

Canary has also supported work at the following institutions:

BC Cancer Agency, British Columbia, Canada
Canary Foundation set up and supported a facility at the Deeley Research Center in Victoria, British Columbia, to generate reagents to test candidate biomarkers for lung, pancreatic, prostate, and ovarian cancer. Canary Foundation and BCCA now work together to manage the antibody and hybridoma resource created over many years as part of this facility.

Early Detection Research Network of the National Cancer Institute, Bethesda, Maryland
The Early Detection Research Network (EDRN), an initiative of the National Cancer Institute (NCI), brings together dozens of institutions to help accelerate the translation of biomarker information into clinical applications and to evaluate new ways of testing cancer in its earliest stages and for cancer risk. EDRN has provided statistical and data management support for the Canary Prostate Cancer Active Surveillance Study, PASS. Additionally EDRN and Canary Foundation jointly funded a multi-institutional project to discover biomarkers of lung cancer in people who have never smoked. Research continues to gain a better molecular understanding of never-smoker lung cancer and to validate biomarkers discovered as part of the joint project.

At Canary, we believe that collaboration drives innovation. We work collaboratively with corporations who are advancing the next-generation of early cancer detection technologies. These partnerships advance knowledge about the potential clinical use of promising diagnostics. Examples include:

Avaya, Santa Clara, California
Avaya has provided video conferencing systems to help our global scientists communicate seamlessly and consistently. Avaya has been a major sponsor of the Canary Challenge, our largest annual fundraiser.

Fujirebio, Malvern, Pennsylvania
Fujirebio, a premier diagnostics company and an industry leader in biomarker assays, commercialized the biomarker HE4 that was discovered in conjunction with Canary’s Ovarian Cancer team research. HE4 is now cleared in the U.S. as an aid in monitoring recurrence or progressive disease in patients with epithelial ovarian cancer.

Genomic Health, Inc. (GHI), Redwood City, California
Genomic Health is well known for their well-regarded breast cancer Oncotype Dx test. The Canary prostate cancer team is partnering with GHI on validation studies of similar tissue-based tests to inform treatment decisions for prostate cancer. This is a gene panel that, if it proves true, will help predict the outcome of the prostate cancer—is it aggressive or indolent?

Labcyte, Sunnyvale, California
Canary Foundation, through the Canary Center at Stanford, is partnering with Labcyte on techniques to improve detection of cancer-related proteins.

Beyond our team members receiving independent funding from foundations, Canary Foundation has also partnered with other foundations to achieve specific joint initiatives. Foundations Canary has worked with on early detection initiatives include:

Early detection remains one of the most important ways to reduce the impact of cancer.

Yet for many cancers, there remain no accurate tools or tests for detecting the disease before it spreads. Support from the Canary Foundation provides critical resources to explore the most novel approaches for improving our ability to detect and treat cancer at its earliest stage. The Stanford Cancer Institute is delighted to be part of this important effort.