Sam’s image: forever in our hearts. 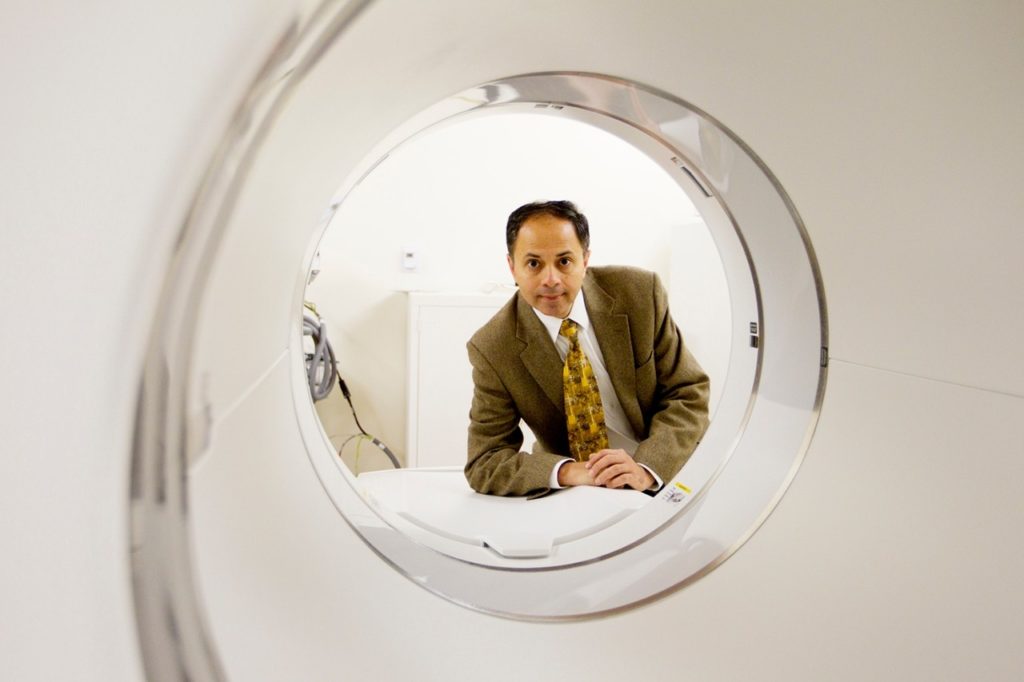 “The body is a mystery.” This is something you don’t expect to hear from a distinguished worldwide leading expert in radiology, who developed cutting edge imaging tests to spot disease early inside the body using new and repurposed technologies in highly innovative ways. You would think such a person would tout how much we do know. And yet, this is exactly what we would hear from our good friend and guide Sanjiv Sam Gambhir. He believed that the reason cancer seemed to take so many different characteristics in each individual person was because we know so little about the body. It was times like this you would be moved by just how humble Sam was. Add to that just how important Sam has been to Canary Foundation’s mission, and you understand why we will miss him as a beloved partner and visionary for cancer early detection.

We met Sam during the first year Don Listwin founded Canary Foundation in 2004. Don had lost his mother several years before to misdiagnosed ovarian cancer and had decided to use his time and resources to try to impact the common problem of misdiagnosis. Don and cancer research Nobel Laureate Lee Hartwell had earlier conversations about cancer being an engineering problem, where answers were out there but not being brought together to sensible resolution. Canary Foundation went on to develop multi-institutional, multi-disciplined teams providing them with start-up funds to work together towards common goals. They then gather enough results to attract further funding from larger grantors and the government.

Sam filled a vital role in the “workflow” as an imaging expert, and much more. He helped solidify our mission to develop tests to curb cancer deaths by finding tumors early, then isolating their location through imaging, followed by removal or targeted treatment. He quickly became the leader of the science teams using his expert skills in convening the lead researchers in the field.
What was it about Sam that made his complex science and vision understandable? Sam was relaxed as he described a full and brilliant universe of information, knowing exactly what metaphors to use to get his ideas across. For instance, Sam eagerly described his work in imaging as using “molecular spies” that could sleuth out cancer tumors, then send back a signal that greatly enhanced a physician’s ability to “spot” the cancer in the imaging.

Sam laughed easily and liked to poke good humored fun at his colleagues. He was mild mannered and didn’t jockey for the spotlight as one with his level of mastery might. He liked pop music and was genuinely interested in what you had to say. While none of this is written in leadership training books, it all worked well in moving the science forward.

In 2008, Canary Foundation and Stanford University signed partnership papers that sealed the deal on an agreement where both institutions would bring resources to create the Canary Center at Stanford for Cancer Early Detection. Sam led Stanford and kept his eye on the potential that would become the first worldwide center focused on cancer early detection. The Canary Center opened doors in 2009 and would grow to attract world-class researchers. We have accomplished much with Sam at our side. Canary Foundation has since mentored those working on opening international centers at Cambridge United Kingdom and the University of Calgary, Canada. Our annual symposium, the first of its kind that attracted young and seasoned researchers to a collaborative forum, has become, with Sam’s help, a prestigious multi-institutional event now organized by national and global partners.

Sam’s big strategy, like Canary Foundation’s, has always been to mentor both new and seasoned scientists. His lab and the Canary Center have been a dynamic place of productivity, exchange, energy and solution-based translational research. The seeds of his work will continue to grow and flourish by those he has taught and inspired.

Sam has been an extraordinary partner. “It is amazing what you can accomplish through collaboration,” Sam said just last September at the Early Detection of Cancer Conference. We wholeheartedly agree.

All of this is to say, Sam has been a good friend to Canary Foundation and a visionary of a bright future for helping those with a cancer diagnosis.

The world will not be the same without him.